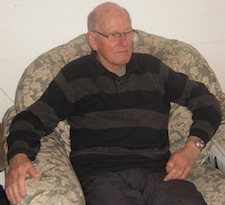 After that little moment on Sunday afternoon where he’d suddenly woken up (after having slept for the best part of a fortnight) and demanded something to eat and drink, he’d fallen back into a deep sleep and that was the last time he ever opened his eyes.

By Monday lunchtime, Sam the nurse had determined that it was time to administer the ‘syringe-driver’ (a battery-operated intravenous pain relief system) and told us that he’d have 48 hours – at the most – to live. His right hand had swelled to double the size and he’d gone all cold and clammy.

We all said our final goodbyes individually on Monday evening (although I’ll never know whether he actually heard us or not, as I discovered agonisingly the next morning that his hearing aid had been on the wrong setting), and I slept downstairs on Monday night so that I could listen-out in case he needed help. Apart from a couple of little groans he made it through the night ok, but when the morning carers arrived they made a shocking discovery: his skin had become a mass of bloody weals/sores.

As he was in a coma by that point we can only hope that he didn’t feel a thing. He certainly didn’t appear to be in any sort of pain, as his face didn’t alter during the whole time the carers washed and changed both him and his bed.

The lovely nurse Sam came again at lunchtime and confirmed that he was very near the end. We’d arranged to all be together that night to watch the football on TV and share a Chinese takeaway. Just as we’d finished eating (one of us had been with him almost every few minute over the previous few hours) the evening carers arrived and the next few minutes are a bit of a blur as – suddenly – he’d just stopped breathing …

Lovely Sam was back on the scene within ten minutes and a doctor arrived shortly afterwards to certify the death. We rang the Funeral Directors who arrived twenty minutes later, so (after barely an hour) it was suddenly all over and we stood numbly in the front garden as they drove him away.

Even when you’re expecting it, you’re still not prepared for it.

The reassuring part for us was that he’d been cared for at home by his family, had barely experienced any pain (thanks to the wonderful pain-management drugs available today), and had simply stopped breathing. That has to be just about the ‘best’ way to go, except for the fact that he’d been asking for someone to help him die every day for eleven weeks, but we have this ridiculous system where we can end an animal’s suffering but not a human’s.

All these do-gooders who bang on about the ‘right to life’ should try justifying to a terminally ill person WHY they need to be kept alive and WHY they have to slowly lose their dignity and the ablility to function until they reach a point where they’re not even able to swallow, need to wear a nappy and have to have their bottom wiped. Call that life?

I am more hurt and angry about that than anything else, because our father wanted to die and we couldn’t help him because THE LAW says he has to be kept alive. I can’t speak for my brothers, but it’s certainly changed me and the way I see my future.  I hope that I stay well enough, long enough for a law to be introduced (as it surely will one day) to give people the right to be able to end their life at a time of THEIR OWN choosing.

We’re working well together in taking the first few steps without him and planning his funeral etc, but are all feeling pretty exhausted emotionally at the moment. It feels very surreal being in ‘his’ house/our family home without him there, but we’ve got to get used to it.

We’re also very mindful of the fact that – in comparison to some – we’ve had it ‘easy’. Our father was very well for almost the whole time during his cancer, and although it was challenging to have to watch him go from still being fairly fit to seeing him lying there as helpless as a baby, it could have all been so much worse, and at least we were able to spend quality time with him and say goodbye. Many people don’t get that – or lose a parent to dementia etc – which must be utterly heartbreaking.

Now it’s just the three of us: my two brothers (+ one wife and one girlfriend!) and I. We’re a small family anyway, and I’m feeling really aware of that right now. Selling the house will be hard because we’ll lose the ‘meeting place’ we’ve always congregated to for any sort of celebration – or sometimes simply just to hang out and watch the football on TV and have a takeaway together with our dad.

We’ve had brilliant help along the way from nurses, carers, and even the local pharmacy and my dad’s doctor’s receptionists – all of whom have worked so well in helping him and us during the last three months of his life.

The funeral’s on the 21st March, and a week after that it’s Easter. I’ll be cooking a big meal for ‘all the usual suspects’ on Easter Sunday and then we’re all going to have to bite the bullet and start on the house clearance/sale etc. Our lives will never be the same again, but we were all there for our father at the end and he knows that we’ll all stick together and look after each other now that he’s not there to look after us …

I’m planning on restarting those Soapy Corners on Sunday 7th April and resuming all my broadcasting activities week commencing Monday 8th April. It’ll be good to be back but I’ve got a hell of a lot to get through first. I’ll be ticking off the days on my Soapy ‘Advent’ Calendar!

Thanks for reading. Have a good week everyone.

Leave a Reply to Ann Click here to cancel reply.