Phil had a bright idea; the sun shines brightly round at the ‘gay Masoods’ and the whole Square seems to be joining in.

Now, what was it I said last week? Ah, yes: “What next; Phil marrying Sharon?”

So, what’s happened this week? Ah, yes. Phil’s going to marry Sharon (not that she knows it yet). Yeah, good storyline that … NOT.

I was joking when I said that & definitely didn’t expect to see it happen seven days later. Honestly; what WILL they dream up next? I dread to think.

He’s not even fit to be out on the streets

Phil’s going for custody of Lexi. This is the murdering; violent aggressive bully with a string of convictions Phil you mean then, is it?

How does he stand a cat in hell’s chance of getting the baby? He could be married to Mother Teresa and surely that still wouldn’t be enough, as Social Services would still need to check his history, wouldn’t they? (Well, probably not in EastEnders. Why let the truth or the law get in the way of a storyline, aye?)

Speaking of which: can someone explain how that little rodent hitting Heather over the head in cold blood and without any provocation was deemed to be manslaughter? Beats me, as does Ben’s phone lying undiscovered all that time in Phil’s bathroom.

Surely he’d have asked someone to get it for him (presumably it was his only phone – with all his contacts etc, on it?), as even a friendless little oik like him might just have needed it – if only to receive texts asking him if he’d been sold PPI Insurance. It doesn’t say much for Phil’s housekeeping either, does it?

They brought Lexi to visit Lola this week and Billy got all dewey-eyed and cooed, “Look at them two together,” as Lola played with the baby, but did you notice how Lexi never once even looked at her ‘mother’. See; she’s already planning a new life for herself.

If I was Lexi I’d be praying to get adopted. Phil said it himself: “A dad that’s banged up for murder and a teenage Billy Mitchell for a mum.” Exactly, and a GAY dad, at that.

I did laugh at Phil’s ‘brief’ Jimmie’s face when he tried to say that he’d heard about Ben being gay.

“You ‘eard wot?” Phil eyeballed him – in that ‘special’ way of his. Jimmy had to think very carefully about how to answer diplomatically!

They’re having a gay old time*

That guy’s a typical wide-boy geezer, innit? He could be Beelzebub himself though – just as long as he sorts it so that I don’t have to see those guinea pig features on my screen again. Besides; I’m far more concerned about those Gay Masoods. Not only is AJ a cross-dresser and Tam’s admitted to ‘Wanting a man like Christian’, but Mas is now encouraging him to become a female impersonator.

“Today you are Zainab. I’ve left a few of her clothes on the back of the door for you,” he told him on Friday. Goodness me. It’s a good job Kamil’s gone or Social Services would be round there like a rat up an alley. The whole Square seems to be going gay. No wonder the pub’s called the Queen Vic.

The sunny side of the street

Notice how the Masoods seem to look as if they live behind bars too? That’s one hell of a ‘southerly aspect’ they’ve got. It’s meant to be the sun streaming in, but it’s always blinding sunshine in their kitchen and yet the rest of the house is like a black hole. 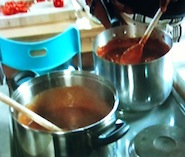 Their pans are pretty dazzling too. Zee’s normally got enough food bubbling away to feed an army, so how come those pans look as if they’ve just come straight from a shop?

As for the Eid dinner they cooked; it was a typical Masood family dinner in which they either put the food on the table and all ignore it in favour of bickering OR leave it sitting there going cold while they’re waiting for some latecomer or other to turn up.

Just a hint of realism … please?

In real life, you wait until everyone’s arrived and THEN you serve the food, don’t you – NOT the other way round? I know it’s only a little thing, but it’s just another little thing that EastEnders gets wrong.

I know the food only a ‘prop’, but even if it was on a hotplate it would at least LOOK realistic. If you’re not going to have any realism, why not just have all the actors sitting in a room reading their lines straight off the script?

It’s meant to represent real life, isn’t it, and it’s like Shirley’s fridge a couple of months ago. She opened it up and not only did it have no light in it (a common mistake in Soaps), but it also happened to be a small upright freezer. Oh, I still laugh at that one!

What else has wound me up this week? Ah yes, Derek. Where DOES he get his money from? There’s something going on with him and Tanya and Carol too, isn’t there? Fancy screwing David’s letter up. That’s just awful. I still think that he should turn out to be David Wicks’s dad … 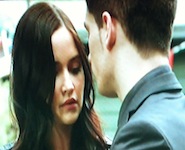 There’s ‘something going on’ with Lauren and Joey too. Ah, what’s a bit of incest between cousins, aye? It’s not as bad as Lola having a baby by her gay, murdering guinea-pig-featured half-cousin twice-removed on his mother’s side (or whatever he is), is it?

No Grins of the Week for you (doesn’t say a lot for the comedy content of the show at the moment either, does it?), but we have got some Appropriate/Inappropriate Music in the Background.

As the gorgeous Tanya was saying how disappointed she was because she really wanted Rainie to be at her wedding, the line ‘Don’t you know I needed you so badly’ from Hot Chocolate’s ‘You Sexy Thing’ was playing in the background.

What on earth is the guy in the picture behind Syed doing? That’s not something you should have on your wall, is it? Do you see what I mean? There’s gays everywhere in the Square – even on the walls.

* I might be a bit late to the party on this one but I noticed on the credits this week that the Masoods actually have a surname of Ahmed. What’s that all about? I DID always wonder why somebody would be called Mas Masood, but I’m even more confused now.

* What’s happened to Phil’s other ‘brief’ – the lesbian one? Not more trouble wiv ‘er missus, is it?

* I was hoping to see Rainie back this week. I thought she might have gone for good, but assume from this week’s lead-in that it’ll only be a matter of time before she reappears? I love her and had said how sad I was to see her go last time as she was such an under-used character – and one I’d like to see back permanently.

* Are we sure Lola named the right gay fella as Lexi’s father? Not only has Christian done Gods-knows-what to his hair, but Lexi seems to be showing more than a passing resemblance this week …

* Based on The Flintstones’ theme tune lyrics!

Got a comment on anything I’ve talked about this week? Tell me what YOU think in a comment below; tweet me before Wednesday afternoon or call in to ‘Jane’s Soapy Corner’ live on Tellyspy between 6.00-6.30 on Wednesday night so that I can put your points across to my listener on the show online!

Leave a Reply to Megan Click here to cancel reply.