If you’re outside the UK, here’s a link to be able to watch UK TV programmes:  bit.ly/oVMz60

I stuck to my guns and didn’t watch on Saturday (I just ‘watched’ it on Twitter instead and it was hilarious!), but I did sneak a look at F’ing Frankie’s performance on Sunday morning though.

We already know he can’t sing. Is that why he just talked his two-lined song Should I stay or should I go? A tone-deaf toddler with a speech impediment and a sore throat could have given him a run for his money on that one. Here’s Simon Cowell’s reaction …

Monday: So, he’s got through again? He should have been in the bottom two … on his own. He cannot sing; it’s a joke. That’s all I’ve got to say.

Come Dine With Me

It was a surprisingly quiet week this week, with the best bit being in Tuesday’s hour-long programme from Telford (on More4).

Chrissie’s pronunciation of the word dauphinoise was a cracker: “Dauphin-yose”. Dave Lamb’s commentary was ticklishly funny!

We also had Rick Wakeman’s double on the night they did the face-painting.

Here’s another photo that would do Harry Hill proud: who’s the image of their host’s statue then?

Four in a Bed

Knocking SDWM off the top spot for early-evening light entertainment this week was the new Series of Four in a Bed.

Four Bed & Breakfast owners all stay in each others’ places, run their fingers along the tops of the doors for dust and then pay what they think it was all worth. Yeah; sounds gripping, doesn’t it? Actually, it can be!

I tried not to watch but failed, and after five minutes of Monday’s first Episode was hooked again. There’s a lot of ‘game-playing’ goes on in this show, but there’s some genuinely funny moments/great one-liners – which is why I watch (and for the breakfasts), and we started in fine fashion with Russian ‘wicked witch’ Galia, who’d lost four stone and whose mission was now to push her mantra of Health & Fitness down everyone’s throat – as it were!

Ann wasn’t having any of it, and various weight-related jibes between the two became the order of the week. Galia’s feedback form had the comment, “The hosts were a little formal to start.”

“Well, I’ll kiss them straight away on the lips next time,” Galia retorted, and she didn’t like Ann’s comment about not being able to get in and out of the bed easily (as it had a hard wooden frame around it). “It might help to lose weight so they can just jump better into the bed,” she replied waspishly.

I love my one-liners. I loved this, but it’s tough on the last day when they all sit round a table together. Max and Diane were a lovely couple (married 40 years but still really in love), but they came in for a bit of criticism and were very upset.

It must be really hard for them to hear criticism, but if people aren’t honest it defeats the object of the show. It’s still a bit sad to see people whose homes/standards are getting criticised though (unless they’re horrible – in which case, they deserve it!). 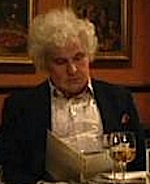 Oh, what a great start. The little boy in his dad’s tinfoil suit got fired, but it could just as easily been James – an economist (at 17?), who could have a great career as a lookalike for the Michael Dinner character from Little Britain. Talk about pompous. He already looks like a middle-aged City trader. Rarely have I seen a lad more born (looks-wise) to his career!

He thought he was the only one who knew what he was talking about, but proved himself as a fully-qualified banker by trying to insist his team sold ice-creams for £1 each on Saarfend beach on one of this summer’s rare sunny days. Luckily Harry H the Project Manager (and my early tip for the title – as well as being cute!), over-ruled him, but they still lost.

However, the only way the girls won was by defrauding their customers. After having been unable to do the simple maths to work out their costings “Three fours are Twenty-Eight,” (Nick’s inscrutable face in the background was a picture!), they then under-ordered on their fruit, so started off with less stock than they needed.

Although they displayed a small sign, played the dirty trick of automatically adding toppings without asking, and even charged for the cones, for God’s sake. They basically ROBBED people with their ‘hidden extras’. (I’m sure that Trading Standards would have been very interested.)

Every one of us will remember a moment in our lives when it’s suddenly hit us that we’ve been royally ripped-off. That’s what this was like. You saw pictures of parents’ shocked faces as they were told the price, and I felt so sorry for that mother when they told her that her little girl’s tiny cone was £37.50*. She was so shocked, but felt she had no option but to pay. Shame on you girls.

Apart from that it, was all jolly good stuff and a great start to the Series. Those of us on Twitter have the added advantage of a hilarious running commentary too, as everyone’s watching and tweeting/re-tweeting as it goes along. Roll on Monday!

* Just kidding. £3.80 – but that’s still a joke. Talking of jokes: did you see Harry Hill’s Young Apprentice review on TV Burp (Saturday 29th)? Hilarious. It’ll be repeated several times during this week on ITV so make sure you check it out! (Young Apprentice Episode 2 BBC1 9.00 pm Monday)

Did you see last week’s Episode of Curb Your Enthusiasm with Ricky Gervais. Gervais played himself (badly), and Susie stole the show for me (as usual). What makes it so agonisingly addictive is how Larry manages to have you swing from being totally with him to totally cringing at him in an instant!

Sublime TV, and apparently this week’s Episode has Larry vying for the affections of the same woman as one of his lesbian friends, the indomitable Rosie O’Donnell. That should be good!

I’ll be checking-out a new Series which starts this week: The Food Hospital. It looks at whether ailments can be cured by simply changing your diet. We can all join in too, apparently. Review here next week.

Jeremy Vine’s Radio 2 Series Sounds of the 20th Century gets its own section this week. Read it to see why!

(Sounds of the 20th Century Radio 2 10.00 pm every Thursday, and available on BBC iPlayer)

PS When I went to get the link for TV Burp I saw this: Harry Hill quits TV Burp, so clicked on the article. I’m not quite as bad as him, but I know how he feels! CLICK HERE TO READ THE ARTICLE