(After not being able to add things from my iPhone (and wasting hours trying to find suitable photos on Google), I’m now able to take photos during Episodes and upload them into this blog. The quality’s not as good but they’re relevant to what I’ve written, so I hope you’ll excuse the quality not being quite 100%!)

Ok. I feel as if I’ve somehow ‘missed a bit’ over the last few Episodes.  It’s as if they’ve been in such a hurry to get Darren’s exit out of the way that they’ve just ‘Fast-forwarded’ a few scenes.

Jodie and Poppy are portrayed as ‘Dumb & Dumber’, so how did Poppy manage to twig that Mickey was talking about Darren being the one who was cheating?  It wasn’t an obvious clue, but she was straight on to it.  Nah, don’t buy that.

‘What’s playing in the Vic this week?‘  had the line “Uh oh, uh oh,” playing at exactly the second she accused Darren of “Messing around behind Jodie’s back,” but I couldn’t find out what song it was, nor the song in the background in his and Jodie’s final scene.  You’re spoiling my game guys.  Either put the title up on the subtitles (as you do sometimes), or make it a bit clearer please!

I was surprised Jodie still wanted to marry Darren once she’d found out. Vanessa was more shocked than surprised.  Ooh, her face (when Syed let it slip about Lauren), was brilliant – as was her acting when she caught up with him. The sound of his fearful, heavy breathing (and when he actually gulped), was a masterstroke. Even I was scared!

He probably did the right thing by legging it though. Married life on Albert Square’s hardly a happy prospect – even with the sweet, kind Jodie for a wife.  Look at Tamwar and Afia.  They’ve only been hitched for five minutes and already look as if they’re just sat-around waiting to die.  I know a man who could help them with that … yes, it’s the Creepy Doctor!

Yusef’s evil plan nearly came unstuck, and he had to do some fast talking to get Tam and Syed round to the house before their mother died of an ‘overdose’.  What is wrong with that man?  If that’s love, he’s got a funny way of showing it, and didn’t you SO want him to get caught out in the Hospital when Masood started kicking-off?  People often fall asleep after eating curry, but that’s probably due to the ten pints of lager. Poor Zee didn’t even get so much as a glass of Lambrini.

Across the Square, Abi’s getting a bit cheeky (teenage hormones clearly kicking-in there).  She said to Tanya, “Well, I don’t want my hair like yours.” (Er, their hair’s identical!)  She’s bickering with her sister too.

Lauren: “All over your face with a trowel.”

Abi: “Well at least I didn’t run our dad over.”

It’s been painful to watch poor Tanya trying to keep up a front, and she finally cracked this week, announcing desperately “I give up,” to her daughters and walking out, before then sharing her secret with Lauren.  It’s gripping to watch.  Tanya and Corrie’s Carla are giving Award-winning performances at the moment, as they each try to deal with their unbearable circumstances. 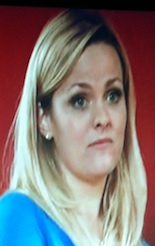 Every tiny flicker of emotion on Tanya’s face is worth a thousand words, and Lauren’s playing her part beautifully; suddenly strong and fiercly protective of her vulnerable and frightened mother.  It’s heartbreaking to watch, and is going to get a lot harder for us viewers in the weeks to come.

There was an announcement went out at the end of Thursday’s Episode, saying, “If you’ve been affected by Tanya’s storyline,” etc.  It struck me that there were several other storylines that night which might have also benefitted from a Helpline number: Ben’s, Zainab’s, Jodie’s and Laurel’s …

There’s always been an assumption that Ben (because he liked dancing and showtunes), would be Gay.  The lovely, sweet, sensitive ‘old’ Ben would have naturally grown into the role, but the ‘new’ Ben looks more like some evil potential paedophile than a young homosexual man … until he takes those disgusting glasses off, and then his whole face/personality seems to change.

He was totally believable as a young man experiencing his first taste of the agony and ecstacy of sexual desire.  EastEnders has always been very ‘open’ about male homosexuality, and they got it just right in this scene with Duncan.

It was touching to watch, and the world seemed to fall silent as they kissed. That little ‘secret’ smile he had to himself as he sat down next to his dad was so lovely. We can all remember that magic first moment from our own lives, can’t we? All together now; aah!

I’m begging the props Department though: just get him some different glasses, please?

I’m sad to think of what I’m going to have to write over the next few weeks about Phil’s reaction when he eventually finds out.  It’s hard enough being a teenager without realising you’re gay too.  It’s even harder if you’ve got a parent who you fear will knock you into the middle of next week.

Faith wasn’t kind to Heather. “Subo here thinks the wedding’s still going ahead,” she laughed, and it was horrible what Lola did to Mrs Olobunmi.  I don’t like to see that.  Talk about giving kids ideas …

Ooh, let’s not think about that, and have our Grins of the week instead:

Phil (to Mandy): “I’d be getting legless too, if all I had to look forward to is Ian Beale coming back.”

Darren: “I’m so proud to say that you’re my friend.”

Tamwar (awkwardly): “Is this where we hug?”

Kat (to Pat when she finds her behind the bar): “Bin wearin’ my dresses an all? ‘Ope you ain’t stretched ’em.”

PS Wasn’t it funny when Zee got caught out by that friend of Yusef”s in the Minute-Mart? How’s this for a grimace, aye?!

PPS In real life, you wouldn’t sit down to dinner with a Creepy Doctor then suddenly turn round to your toddler (who you’d left playing at the side of the table), and ask him if he was hungry, would you?

PPPS Is Michael suddenly being nice, or has he still got a nasty plan?

PPPPS Darren drove off without any possessions. Even by EastEnders’ standard, that’s ‘Travelling Light’!  CLICK HERE TO GO TO EASTENDERS’ HOMEPAGE